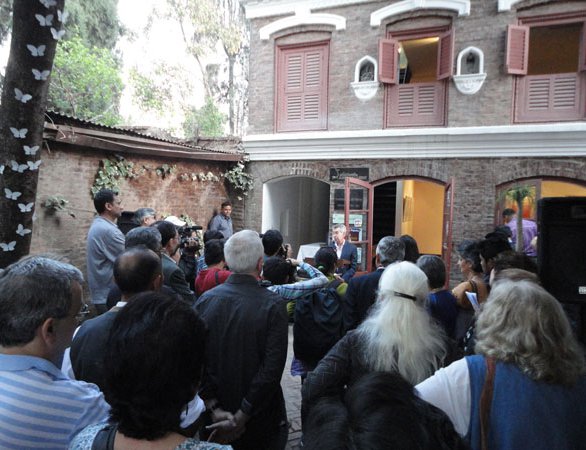 As the sun began to set hazily at half past five on the 19th of April 2013, a fairly large crowd gathered in front of Siddhartha Art Gallery, Babermahal Revisited. These people were anxiously waiting for the much-anticipated art show to open. This show was different from most, as the artist was known more in Nepal as an ambassador. The art show featured works by Marcos B. Duprat Ribeiro, the ambassador of Brazil to Nepal.

Sangita Thapa, the curator and owner of Siddhartha Art Gallery, and Kunda Dixit, the editor of the Nepali Times, introduced the art show saying many positive things about the ambassador and his work. Before the doors to the gallery were officially opened, the ambassador spoke himself.  In a very delicate form of English, with a slight Brazilian twang, he expressed his gratitude. He was grateful to be here, in Nepal, and to have his art showcased.

The envoy mentioned he had previously been the ambassador to nine other countries. How did Nepal stand out from the rest? As he said, “Nepal is very special, I see the possibility of beauty everywhere.” With that, the doors of the ‘Genesis of Color’ opened.

This particular art show had 25 works by Duprat himself. Out of the 25, 5 were painted between the years 1997 and 2010. The rest were created after Duprat’s arrival in Nepal.  He called these pieces of works, his ‘color landscapes’. He used mostly oils. The use of oils allowed him to layer and add depth to his work. Where does he get his ideas in order to make such masterpieces? He declared, “The quality of light in the Kathmandu Valley and the mystical proximity of the high mountains have been a significant source of inspiration in the making of these works.”

Most of his images are formed with use of pastels. However, some include rasher, harsher, brighter colors in order bring out details. The older the work, the darker the colors used. In his most recent works, pastel colors are mostly visible. Once in a while, the pastel routine is unexpectedly broken with a brilliant hue.  Almost all the pieces have light integrated within them.  The light in the painting is accentuated by using different, unforeseen colors. In the sky, flowery pinks and grape-tinted purples are added along with the usual sky blues and whites. These images use many different quantities of lights, space, and color.

Mountains are in abundance within his painting. In some, majestic mountains are seen standing strong above clouds while in other, the sun is lavishly painted, along with the sea. The brilliant, luminous sun dominates the canvas bringing with it a sense of tranquility and serene authority.  The sun and sea are drawn from different perspectives, creating a layer-like look that of sedimentary rocks. Narrow pathways and large windows are depicted in profusion. Rivers and stones are created with such delicacy that the movement of the water is almost visible.

There were a few works that especially stood out. One painted canvas was named, “Sky and Sea”. In this particular one, the large sun is vividly shining in the middle. The horizon is visible and the sea lies beneath it, tucked neatly. This painting is done mostly using pale pastel colors. However, a bright red hue placed right under the horizon, breaks this monotonous pattern. Gentle, unexpected color bursts such as this red, cause specific details to stand out.

Brazil is a country known for the Amazon River and its love for soccer. However, with an artistic Ambassador like Ribeiro, Brazil may be known for its art too. The ambassador’s art exhibition will remain till the 2nd of May 2013. If you happen to be around that area anytime soon, the gallery should be a necessary stop.

Japan Hands Over An Oxygen Generation And Distribution System To Dhankuta Hospital By NEW SPOTLIGHT ONLINE 1 day, 10 hours ago