Although Nepal hasentered the reconstruction period after the devastating earthquakes of April and May, the threat of violence against women and their risk of being trafficked are yet to subside. Many rural areasare yet to come out of the crisis left 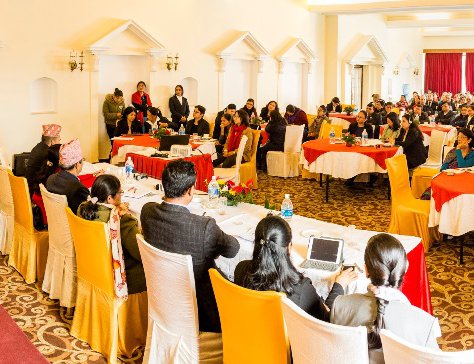 As usual, a group of women activists, government officials, NGO workers, police officers,donor representatives, senior officials of Ministry of Women, Children Social Welfare and others gatheredin four star hotels of Kathmandu on December 2 to discuss the legal status, progress and achievement to reduce violence against women.

Along with other countries, Nepal conducted the 16 days of activism against gender based violence from 25 November to 10 December. Focused in the urban areas, particularly Kathmandu, the campaign spent most of its time to discuss and debate the problems in the city.

Jointly organized by the Ministry of Women, Children, and Social Welfare in technical collaboration with UNCT Gender Theme Group, the half day meeting included panel discussion on the elimination and prevention of all forms of violence against women and girls in the present context of Nepal.

Although participants and panelists highlighted the pathetic scenario, pointing to the various issues related to earthquakes and the effects on the life of women and children, the debatesheld in the star hotels did not touch the real problems of rural Nepal, particularly the earthquake devastated areas where women, children and elderlyare living in temporary shelters.

Gender-based violence is a very serious issue in Nepal. Nepal Demographic Health Survey 2011 shows that among women (15-49 years), 22 percent experience physical violence and 12 percent sexual violence at least once. Domestic violence, marital rape, dowry-related violence, child marriage, polygamy, female infanticide, witchcraft accusations, Chhaupadi, Badi, Deuki, Jhuma, Kamlari, and trafficking of women and girls for sexual exploitation are particular problems of gender-based violence in Nepal. Although the Government of Nepal has made commitments to ensuring that laws and policies are in place, change is slow to occur, in part because the culture of silence surrounds GBV.

With the presentation by panelists highlightingthe state of women in Nepal and progress made following the promulgation of the new constitution, the urban centric activists as usual focused their questions and discussions on peripheral issues.

Presenting the paper on Constitutional Provisions on Gender Equality and Gender Based Violence, Joint Secretary at Ministry Of Law and Justice, Parliamentary Affairs Lila Devi Gadtaula said the new constitution has almost ended all discriminatory laws.

“This is the great year for women in Nepal. Despite certain citizenship provisions, the constitution fully guarantees equal status to women and declares all the discriminatory laws null and void,” said Gadtaula.

But some citizenship issuing provisions still discriminate against women.

“VAW is a universal campaign and it has its global national significance. As long as it is celebrated as an annual ritual, no drastic change will be possible in rural parts of Nepal. We need to localize the campaign,” said Dr. MeenaPoudel.

According to a global report, one in three women worldwide has experienced physical or sexual violence, most often by an intimate partner. In most countries, fewer than four in 10 survivors of such violence seek help.

Despite so much progress, women in Nepal continue to face violence. According to a recent study, women are still vulnerable to all kinds of violence. “Although there are incidents of trafficking coming to light, the number of cases involving violence against women is declining with strong commitments of Nepal Police,” said Mingmar Lama, DIG of Nepal Police, presenting his paper on strengthening Law Enforcement for Eliminating Gender Based Violence.“As there are special units with women police in all district police offices, the number of women coming to report cases has increased.”

“Nepal is among the very few countries in the world where the constitution guarantees gender equality and there are laws and policies to eliminate gender based violence,” said BindaPandey, former member of Constituent Assembly.

Globally, over 140 million girls and women have undergone some form of female genital mutilation. In developing countries, one in every three girls is married before reaching 18, and one in nine before 15.

Violence deprives women and girls of their human rights to health, education and participation in the affairs of their communities and nations. The health effects of violence are immense, from forced pregnancies,and unsafe and forced abortions, to life-long physical injuries and trauma. And survivors often lead lives shadowed by fear and stigma.

“Nepal has made a big progress in eliminating violence against women.Our new constitution gives equal rights to women and our law forbids all forms of violence against women,” said  RameshDhakal, joint secretary,Office of the Prime Minister and Council of Ministers, legal and policy frameworks on gender based violence.

At a time when the international community is about to embark on a 15-year journey towards equitable, inclusive, sustainable development, this year is very significant.

“Ministry of Women, Children and Social Welfare has taken several steps to eliminate violence against woman. "There are shelters and centers to place the women who suffered from violence,” said Madhu Prasad Regmi, secretary at the Ministry.

For the new United Nations Sustainable Development Goals to have a meaningful, positive impact, actions must be taken to break the cycle of violence against women that denies millions of women and girls their fundamental human rights and their ability to contribute to the economic and social progress of their nations.

“Along with awareness campaign, we have strong legal regime and policing to end the Gender based violence,” said RadhikaAryal, joint secretary, Ministry of Women, Children and Social Welfare. "After the devastating earthquakes, we engage youth, men and boys to check the gender based violence.”

Ending violence against women should be a priority for every human being. According to experts, this is not only a woman's issue; it affects all people. As long as the dignity and well-being of half of humanity is at risk, peace, security and sustainable development will remain out of reach.

There is the need to develop global standards for essential services for women and girls subject to violence and comprehensive technical guidelines to help countries implement them.

With the new global goals, we have a collective responsibility to end violence against women and girls and we have a deadline to reach this goal by 2030. We need to do more, all of us, and leave no one behind.

Every woman and girl has the right to live a life free of gender-based discrimination and violence.This is an imperative not only for dignity, human rights and well-being of women and girls, but for our common humanity and our common future.

According to UNFPA, health service providers are the front line people in response to gender-based violence (GBV). For women who have experienced violence - as 48 percent of Nepali women report that they have - the shame, stigma, and pressure from communities and families often prevents them from seeking any help at all, let alone from the police or legal services.

Going to a doctor or nurse, however, does not carry the same associations, and health care providers can often uncover abuse, and follow up with good treatment and referrals, even when women do not mention it explicitly.

For this reason, UNFPA, the United Nations Population Fund, works in Nepal to ensure that health care providers are fully and comprehensively equipped with the skills and competencies necessary to give health services and referral for the well-being of GBV survivors. On the Day for the Elimination of Violence Against Women, UNFPA Nepal said it was happy to celebrate the small step forward.

A new clinical protocol on the management of gender-based violence aims to give the proper guidance to health workers, and an accompanying training package focuses on developing the competencies needed to implement the protocol with all the skill, sensitivity and respect for the survivor that a proper response requires. The protocol was developed by the Ministry of Health and Population with UNFPA support, and with technical assistance from Jhpiego. It was finalized through an extensive consultative process with a range of different stakeholders, including the government and development partners.

Identifying GBV cases, knowing clinical symptoms, providing the patients with information about its consequences on women's health, and providing appropriate psychological care, have always been challenging tasks without the proper guidance, says Raj KumariChaudhary, a staff nurse working in a government-run health center in southern Nepal. "Now the protocol has made life easier for us," she continues, well aware that she, and other health workers like her, are likely to be the first point of contact for survivors.

“The protocol aims to empower health care providers to identify GBV survivors, manage cases and make appropriate referrals. It helps them conduct a clinical assessment of the survivor, provide appropriate treatment, preserve medico-legal evidences and report the findings to an appropriate level. It will strengthen the health system respondto the GBV,” said Dr.KishorAwasthi, a government family planning officer working in Baitadi, far-western Nepal. "Now with the protocol, I think health care providers will gain the required competencies to deal with GBV cases in a health setting."

"GBV is a big issue in our district too. I am happy that this protocol will strengthen our capacities to cope with difficult situations," says Gyan Chandra Rajbanshi, the health post chief at Shitalpati in Sindhuli district.

Despite efforts made with support from Nepal’s development partners to end violence against women, a wide gap remains between the rural and urban areas in dealing with the issue. The time has come extra efforts are made to bridge the gap.

Melamchi Water To Reach Kathmandu On Saturday, Urged Locals To Cautions By Agencies 57 minutes ago

PPE And Reproductive Health Kits Handed Over To Nepal By NEW SPOTLIGHT ONLINE 21 hours, 32 minutes ago