Behind The Scenes Of Black Market Or Free Market

Behind The Scenes Of Black Market Or Free Market 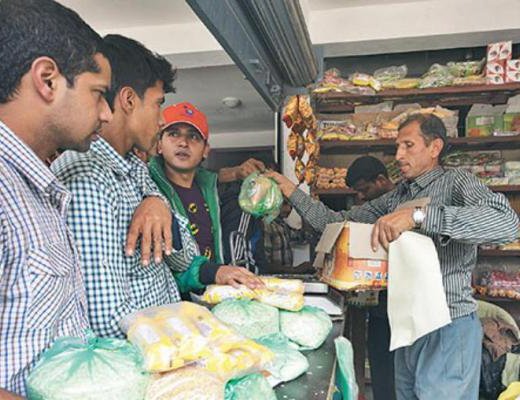 Even though the number of vehicle on the streets of Kathmandu has reduced by a significant amount, all of us at some point during the day must pause and look at the still crowded streets and wonder to ourselves – “Are we going through a fuel crisis?” And the answer still is – “Yes.” We ask each other – “How have you been getting petrol?” And the answer at the beginning of the crisis was – “I wait in line”, but now the answer is “in black.” It is quite interesting that the ‘infamous’ black market is quite famous in Nepal and the underground economy is not underground anymore – it is out in the open, basking the winter sun. The reason is that the black market in Nepal runs on meeting one of people’s basic needs – fuel. The article explores the effects of black market on Nepalese economy and a possible solution to end these transactions, which are technically illegal in nature.

The black market for fuel has been, more or less, meeting the demand for fuel in the country. However, it is one of the main reasons why the fuel crisis has so significantly affected the country’s economy and it has also grossly undermined the government’s credibility. There are four main reasons behind the black market negatively affecting Nepal’s already regressing economy. First, more transactions on the black market means less revenue to the Government. The black market transactions are off-the-record. Thus, it is very easy for these transactions to evade the taxes, which would otherwise be paid to the government. Second, bigger the black market, the fewer opportunities for legitimate industries to function and meet people’s demand for fuel. Third, the bigger the black market the more underestimated is the employment data of the country. It is true that black markets employ a great number of people, but they are not officially recorded in the government’s data. Thus, even those people who are employed in the black market will be considered unemployed. Fourth, it may have led to deliberate creation of shortages in the country. Black markets leads to great monetary gains for its stakeholders, and thus, deliberate shortages are created because the stakeholders are aware of the fact that even though prices are hiked by linking it to the shortage of goods, the demand for these goods is not diminished.

Let us now dwell on the first and the fourth consequence of black markets which may serve to explain the continuous increase of black market transaction for fuel in the country, needless to say that if black markets are allowed to function at the current rate, their negative effects will only increase.  It is true that more transactions on the black market lead to less revenue to the Nepali Government. The question that arises is – shouldn’t this be alarming to the government and be treated something that requires immediate attention? Since it is not being treated so, one cannot ignore what it implies – less revenue to the Government, but maybe more to those who work for the Government and benefit by it. The role of Nepal Oil Cooperation (NOC) in fueling the black market has been more and more speculated recently. Is the NOC negotiating with other sources to bring fuel into the country? If yes, what are the sources? If not, why not?

These questions sometimes lead one to wonder about the deliberateness behind the shortage that Nepali people are currently facing. Yes, the country is going through a crisis, but how acute is the shortage that we have been facing for the past 4 months? It is necessary to ask this question because at times one hears about the many entry points, including Birgunj, opening, whereas at other times, they still remain closed. Instead of the people being assured that the concerned stakeholders are trying their best to solve the problem, people are worried about not having fuel to go to work the next day or to cook food. Thus, consumers are likely to stock up fuel, even at elevated prices. But this fuel available in elevated prices seems to be abundant.

An article published in Kathmandu Post offers a solution to the influx of black market transactions in the country – break the NOC monopoly and allow fuel to be sold through free and competitive sources. It may be the best way to put an end to the current black market situation for fuel. However, before resorting to this solution it is necessary to understand that ‘free markets’ are not technically “free from any intervention by a government.” Free markets require the state to create and maintain laws for them to exist. I say this to point out that unless the concerned state actors are willing to put an end to this shortage, it may be difficult for any kind of competitive markets to emerge. What may instigate a change in the state’s current operating system is still an unanswered question.

Minister Gyawali Stresses The Need To Ensure Easy And Affordable Access To Vaccines By NEW SPOTLIGHT ONLINE 17 hours, 8 minutes ago

International Year For The Elimination Of Child Labour By NEW SPOTLIGHT ONLINE 1 day, 2 hours ago

Nepal Require Rs.665 Billion To Rescue The Economy Weakened By COVID-19 By Agencies 1 day, 3 hours ago