Accepting over 90,000 Bhutanese refugees, the United Sates has shown its commitment towards the humanitarian cause 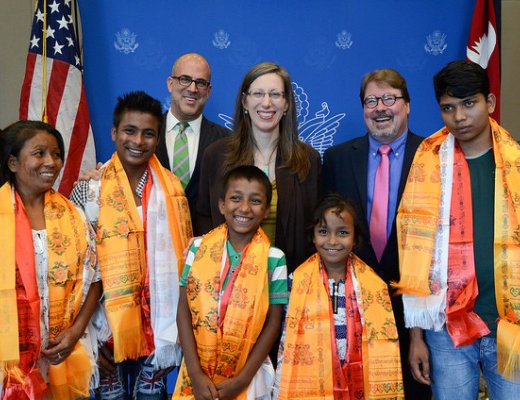 Living for almost two decades in the Bhutanese refugee camp, Sahri Maya Thatal finally got a place she will call her home. Thatal and her four children left Nepal to start their new lives in New Hampshire.

Families of Thatal lived in uncertain situations in Nepal’s southern plains, in the east, in refugee camps, until, like many others, she flew to the U.S. The Bhutanese refugee crisis, a large refugee crisis, is near its end.

From the very beginning, the U.S. provided necessary food and other humanitarian support to the Bhutanese refugees.

U.S. Ambassador to Nepal Alaina B. Teplitz met with Sahri Maya Tahatal, and bid farewell to the 90,000th Bhutanese refugee to be resettled in the United States. Ambassador Teplitz recently visited the Beldangi Bhutanese Refugee Camp in Jhapa where she discussed the third-country resettlement program, which is close to a completion.

“The Nepali people and government have been very gracious hosts to refugees for decades and the third-country resettlement of Bhutanese refugees is one of the most successful refugee management stories in recent memory,” she said. “However, the massive resettlement program is coming to an end. While the international community continues to ask the Government of Bhutan to repatriate those refugees who would like to return, finding a durable solution here in Nepal for those who will remain is critical.”

In a ceremony at the U.S. Embassy, Thatal shared her hopes for new opportunities for herself and her children in the United States after spending over 20 years in a refugee camp. Paul Norton, International Organization for Migration (IOM) Chief of Mission, and Kevin Allen, United Nations High Commissioner for Refugees (UNHCR) Country Representative, joined Ambassador Teplitz in bidding farewell to Thatal. "With 90,000 in the United States, the total number of Bhutanese refugees who have been resettled to third-countries has reached 105,000,” said a press release issued by Public Affairs Section of Embassy of The United States, Maharajgunj, Kathmandu, Nepal.

Not only Bhutanese refugees, the United States have also been rehabilitating the Tibetan Refugees from Nepal. This shows a long tradition of United States to respect the human dignity and human rights.

The United States, in coordination with the government of Nepal, UNHCR, IOM, and the governments of Australia, Canada, Denmark, the Netherlands, New Zealand, Norway, and the United Kingdom began resettling Bhutanese refugees from eastern Nepal in 2007.

Since late 2007, UNHCR in Nepal has helped more than 104,000 refugees from Bhutan start new lives in the United States, Canada, Australia, New Zealand, Denmark, Norway, the Netherlands, and the United Kingdom.

Providing Sahri Maya Thatal and her family home and accepting overwhelming numbers of Bhutanese refugees, United States has shown its commitments towards the people without home. For a country like Nepal, it is a great relief that the Bhutanese refugee camp will be gone.

Nepal To Graduate From The LDC Category By 2026 By NEW SPOTLIGHT ONLINE 10 hours, 9 minutes ago

India To Fund Rs 530 Million For Reconstruction of 25 Health Posts In Nepal By NEW SPOTLIGHT ONLINE 1 day, 7 hours ago

Girls Under18 Represents 20 Per Cent Among Women Undergoing Safe Abortion In Karnali By Agencies 4 days, 19 hours ago