The main culprits in the Syrian crisis are not the rebels or Assad but the West and Russia. 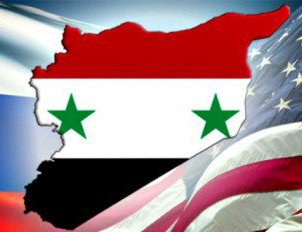 The media, earlier this month, was flooded with photos of panic-stricken, bloodied men, women and children wearing oxygen masks, some unconscious. The scenes were captured after the Syrian government headed by Bashar Al Assad dropped a deadly chemical bomb inciting huge international outrage.

The attack claimed the lives of as many as 100 including scores of children. In a war that has become a playground for the West and Russia, US President Donald Trump was quick to condemn the incident and called it an ‘affront to humanity’. Russia, on the other hand, was quick to cover up for its ally. It said that the entire attack was ‘staged’ and  even vetoed a United Nations Security Council resolution that demanded the Syrian government cooperate with an inquiry into the suspected sarin-gas attack.

This ongoing proxy war and atrocity in Syria symbolizes the six years of devastation and deadlock that the country has faced. Even after thousands of deaths and millions being displaced, it shows no sign of ending anytime soon.

The Syrian crisis began in the light of the infamous Arab Spring, six years back. When authoritarian leaders in its neighborhood countries starting falling down one after the other, protests spread like a wildfire in Syria demanding the resignation of its President Bashar Al Assad. But little did anyone know that the war would stretch for so long and tear the entire country apart.

The main culprits in the Syrian crisis are not the rebels or Assad but the West and Russia. The war ravaged nation might have met with a happy ending had it not been for the interference by West and Russia. The West, particularly the US, has been supporting the rebel groups whereas arch-rival Russia has been an ardent supporter of Assad; providing it with military and financial assistance. The foreign meddling in the crisis has only prolonged the mess. In the ensuing tug-of-war, the only ones to suffer have been the Syrian people. More than 400,000 have lost their lives. More than 11 million have been displaced.

With the level of devastation that has accrued over time and the hard headedness shown by the authoritarian Assad, it appears that there are little chances that the crisis will be resolved militarily. Foreign powers have time and again sought solution to the problem earlier in the name of ‘international diplomatic efforts’. But such efforts have been nothing else but mere formality. The US, Turkey and Saudi Arabian coalition should let-go its stern demand of Assad’s removal. In the six years of crisis, it has become clear that he isn’t going anywhere. He has to be featured in the country’s future. On the other hand, Russia should immediately halt its military assistance to the Syrian government. It is high time it realize that that it’s tussle with the West, which it has been playing out in Syria, is bringing no good.

Speaking to the Associated Press last year, President Assad had said that he could not say when the war would end. He added that there were strong chances that it would drag on as long as it was funded by other countries. Assad is right. Foreign powers should realize the magnitude of devastation the crisis has caused and seek for an amicable solution. A democratic system might not be in Syria’s fate. But that could be the only way out.

US: Troops In Afghanistan To Withdraw By September 11 By Agencies 9 hours, 38 minutes ago