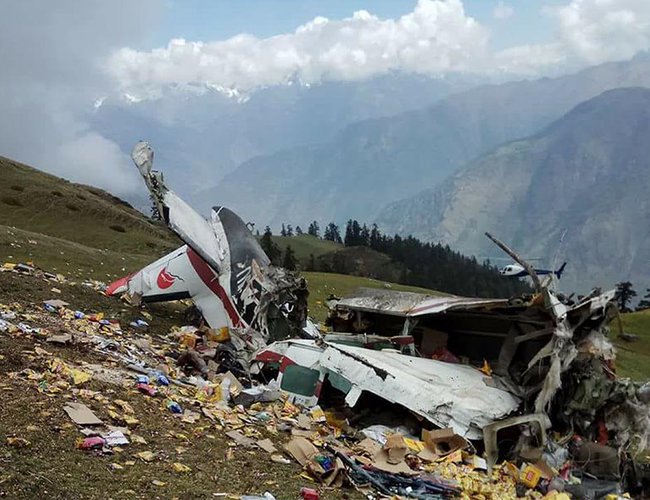 Although certain pre-requisites need to be fulfilled to issue permission to fly single engine aircraft in Nepal’s hilly terrains, the civil aviation authority issues the permission undermining such pre-requisites.

Mountain Air’s recent plane crash is the latest case of Nepal’s Civil Aviation’s negligence over single engine planes. Just three years ago, CAN had completely banned one engine to fly in the mountain terrains.

With the pressure from political leaders and business community, CAN revoked its decision allowing single aircraft for cargo purpose. The Probe Committees have clearly recommended CAN not to allow single engines to fly in Nepal’s terrains as there are no places to safely land the plane in case of engine failure.

According to an old saying, "There is safety in numbers.” If the saying is true, if one engine is safe, are two engines twice as safe? This means single engines are more vulnerable than the two engines in case of emergency.

According to a study, a light twin engine pilot finds time to pick a spot for an emergency landing in case of failure of one engine. This is not so with the case of single engine. The single-engine pilot's limited choices from the twin-engine pilot's options.

Single engine pilots have very few options for survival in case of failure of engine.

In most cases the only choice is selecting what not to hit. This is where prior planning is important. However, with only few open spaces in mountain terrains, even a safe pilot familiar with the local area cannot save himself.

In the recent case, even with a long experience of flying the single engine in the mountain, Makalu Air cargo aircraft Pilot Kiran Bhattarai and co-pilot Aditya Nepali were unable to survive. Both of them died in the crash that occurred at an altitude of 12,800 feet.

Lawmakers raised issues related to air safety in the House of Representatives in the aftermath of the crash of a single-engine cargo aircraft of Makalu Air. Lawmaker Dilendra Prasad Badu said such accidents involving single-engine aircraft had been repeating frequently.

Member of Chhakka Bahadur Lama said air transport was not an option but compulsion for the people of Humla with no road access, and such accidents occurred frequently.

Although several fatalities have already occurred in the mid-west in the accidents of single engine, the time has come for CAN to consider whether it is appropriate to allow single engines to fly.