JICA completes reconstruction of a number of schools and infrastructure 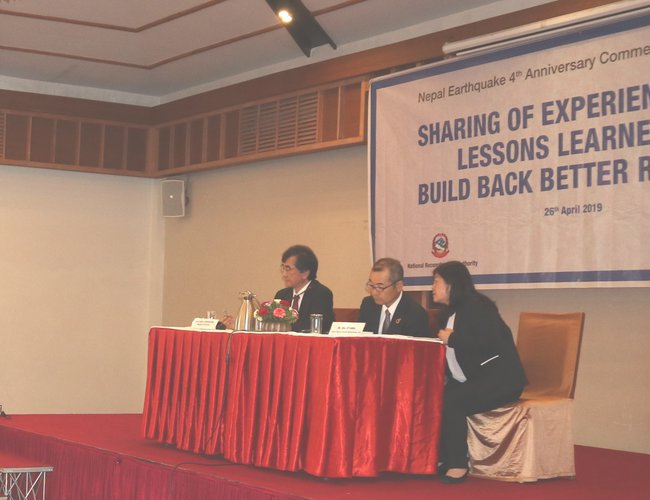 As Japan International Cooperation Agency JICA Nepal is celebrating its fifty years in Nepal, its contribution to Nepal's all round development is being widely appreciated. From building infrastructure like road, drinking water and hydropower to agriculture, education and disaster, JICA has been there in all areas.

As the reconstruction of building and infrastructure continues, Japan International Cooperation Agency JICA Nepal has published a photo book capturing some of the major accomplishments in the last four years.

A total of 236 schools are being reconstructed in 6 districts (Gorkha, Rasuwa, Nuwakot, Dadhing, Makwanpur, and Lalitpur) with JICA support.

"We feel happy that we are going to school and pursuing our education, thanks to JICA. Our school buildings are stronger, making us feel safe and secure. In addition, learning is fun now, as our school is well equipped with not just classrooms, but also good facilities like separate toilets for boys & girls and we now have a library too,” said a middle school student from Dharmodaya Secondary School in Mirkot, Gorkha .

JICA has assigned two heritage restoration experts at the Department of Archeology to support rehabilitation of three temples in the Kathmandu and Patan Durbar Squares. Japanese technical knowledge is transferred to the government counterparts on a day-to-day basis through collaborative work.

About 1,500 people in the earthquake hit communities in Gorkha and Sindhupalchowk have received livelihood recovery support through a JICA project. About 80% of the beneficiaries were women, taking part in such activities as vegetable and maize production, goat raising, and quality seed production.

In Ampipal Hospital, Palungtar, Gorkha, a seismic resilient Outpatient Department (OPD), completed in December 2018. It provides medical services to the people of Amppipal and the surrounding areas. More than 200,000 people are expected to benefit from this new building. This is one of the 22 priority public facilities in Gorkha reconstructed through JICA’s Quick Impact Projects (QIPs).

Bridges in Gorkha JICA has built five new bridges along the road connecting the central Gorkha and the epicenter region around Barpak, to help expedite reconstruction and recovery in the surrounding communities which were not accessible during monsoon. The local people prefer calling the new bridges as “Japanese bridges.”

Since immediately after the devastating earthquake struck Nepal in April 2015, JICA has been supporting the Government of Nepal and its people in the post-earthquake recovery and reconstruction, by pursuing the principle of Build Back Better (BBB). Although reconstruction efforts are still ongoing, this photo book aims to capture some of the major accomplishments in the last four years.

This year marks the 50th anniversary of Japanese Cooperation in Nepal (1969-2019). This occasion thus assures stronger ties between Japan and Nepal with better partnership and cooperation in various development efforts.

Japan International Cooperation Agency (JICA) is a governmental agency that coordinates official development assistance (ODA) for the government of Japan. JICA is one of the world’s largest bilateral aid agencies with a network of 100 overseas offices and projects operational in more than 150 countries. It is chartered with assisting economic and social growth in developing countries and for the promotion of international cooperation. In accordance with its vision “Leading the world with Trust,” JICA is advancing its activities around the pillars of a field-oriented approach, human security and enhanced effectiveness, efficiency, and speed.

JICA supports the resolution of issues in developing countries through flexible combination of various types of assistance.

A total of 236 schools are being reconstructed in 6 districts (Gorkha, Rasuwa, Nuwakot, Dadhing, Makwanpur, and Lalitpur) with JICA support.

Nepal And India Will Meet On August 18 To Discuss Development Issue By News Desk 17 hours, 17 minutes ago

NEICHU MAYER: Honored With Cause By NEW SPOTLIGHT ONLINE 1 day, 18 hours ago

Gautam Buddha Was Born In Lumbini,Nepal By NEW SPOTLIGHT ONLINE 3 days, 7 hours ago

Prachanda And His Group’s Activities Are Disgraceful: DPM Pokharel By NEW SPOTLIGHT ONLINE 3 days, 17 hours ago