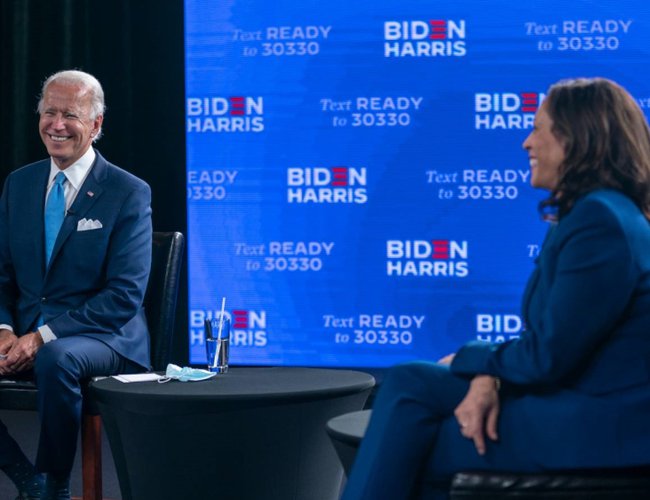 Biden, a 77-year-old white man, embraced the significance of naming the first Black woman to a major party's presidential ticket, but he also focused on other attributes Harris brings to the ticket.

Biden hailed the California senator, the 55-year-old former prosecutor who a year ago excoriated Biden on a primary debate stage, as the right woman to help him defeat Trump and then lead a nation facing crises in triplicate: a pandemic, wounded economy and long-simmering reckoning with racism.

Harris, Biden declared at a high school gymnasium in his hometown of Wilmington, Delaware, is "smart, she's tough, she's experienced, she's a proven fighter for the backbone of this country."

"Kamala knows how to govern. She knows how to make the hard calls. She's ready to do this job on day one," he said.

Taking the stage after Biden, Harris flicked at some of the gender critiques she had faced throughout the Democratic primary, saying she was "mindful of all the ambitious women before me, whose sacrifice, determination and resilience makes my presence here today even possible."

She then launched into an attack on Trump, lambasting him for a lack of leadership on the coronavirus pandemic.

"This is a moment of real consequence for America. Everything we care about - our economy, our health, our children, the kind of country we live in - it’s all on the line," she said.

The Biden campaign had said it hoped to create a first public appearance that blends the momentous nature of Harris' selection with the realities of the 2020 campaign and the gravity of the nation's circumstances.

After speaking, Biden and Harris hosted an online fundraiser designed to let small donors get a fresh glimpse of what the Democratic presidential ticket will look like in the lead-up to election day on November 3.

"The virus has impacted almost every country. But there's a reason it has hit America worse than any other advanced nation," Harris said.

"It's because of Trump's failure to take it seriously from the start. His refusal to get testing up and running. His flip-flopping on social distancing and wearing masks. His delusional belief that he knows better than the experts," she said.

The US has recorded 5.1 million cases of infection and more than 165 thousand deaths from the virus.

Harris talked about how her upbringing and her parents, Jamaican and Indian immigrants, who met while protesting for civil rights in Oakland back in the 1960s.

"My mother and father, they came from opposite sides of the world to arrive in America. One from India and the other from Jamaica in search of a world-class education. But what brought them together was the civil rights movement of the 1960s," she said.

"And that's how they met as students in the streets of Oakland marching and shouting for this thing called justice in a struggle that continues today."

Kamala Harris speaking at a campaign event, on her first joint appearance with presidential candidate and former Vice President Joe Biden after being named by Biden as his running mate [Carlos Barria/Reuters] [Daylife]

Harris characterised 2020 as a "moment of real consequence for America."

"Everything we care about, our economy, our health, our children, the kind of country we live in, it's all on the line. We're reeling from the worst public health crisis in a century. The President's mismanagement of the pandemic has plunging us into the worst economic crisis since the great depression," Harris said.

In a sharp criticism of President Donald Trump, "America is crying out for leadership," she said. "Yet we have a president that cares about himself more than the people who elected him," Harris said from the podium.

Speaking about Biden, she said: "He's someone who never asks, 'Why is this happening to me?' and instead asks, 'What can I do to make life better for you?' This empathy, compassion, this sense of duty to care for others, is why I am so proud to be on this ticket," she said.

California Senator Kamala Harris began speaking during her first campaign appearance as Biden's pick for vice president. She spoke highly of Biden, mentioned the women who helped pave the way for her and acknowledged the work that remains to be done to curb the coronavirus pandemic.

"After the most competitive primary in history, the country received a resounding message that Joe was the person to lead us forward and, Joe, I'm so proud to stand with you. And I do so mindful of all the heroic and ambitious women before me whose sacrifice, determination and resilience makes my presence here today even possible," Harris said.

Joe Biden sought to speak to the angst Americans are feeling as the COVID-19 pandemic crushes the US economy and leaves millions of Americans out of work.

"Million of Americans are living that struggle right now as we speak, especially in this moment of crisis, especially with so many jobs lost," Biden said.

"It'll be the work of our administration to make sure they get a fair shot. Working families need someone on their side in this nation because they certainly don't have one in the president," said.

Biden On First Foreign Trip As President By Agencies 1 week, 1 day ago

US To Donate 25 Million Doses Covid Vaccines Overseas Including South Asia By Agencies 1 week, 6 days ago