Hurricane Laura Hit The US State Of Louisiana

Hurricane Laura Hit The US State Of Louisiana 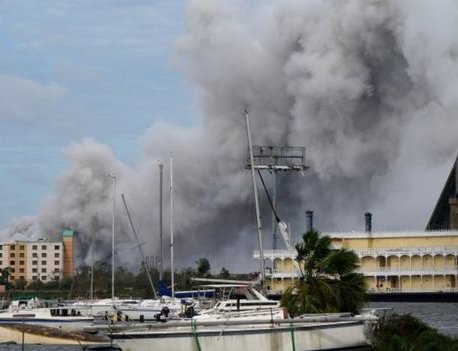 At least four people have been killed by falling trees as Hurricane Laura battered the US state of Louisiana.

Winds of up to 150mph (240km/h) caused severe damage, with power cuts to more than half a million homes and a chemical fire from an industrial plant.

But the feared 20ft (6m) storm surge was avoided as the hurricane, the state's biggest, tracked further east.

Laura has now been downgraded to tropical storm status and has crossed into Arkansas.

President Donald Trump was briefed at the Federal Emergency Management Agency (Fema) in Washington and said he would go to the area at the weekend.

He said he had been prepared to postpone his speech at the Republican National Convention later on Thursday to travel to the region but added: "We got a bit lucky. It was very big and very powerful but it passed quickly."

Laura and another storm, Marco, earlier swept across the Caribbean, killing 24 people.

Hurricane Laura has strengthened to a Cat-4 storm before making landfall. The violent storm is packed with a wind speed of about 240kmh which is just short by about 14km to be a Cat-5 Hurricane, the top most category. Laura has become an extremely dangerous storm with catastrophic potential and resulting unsurvivable storm surge in excess of 15feet.

The well defined and sharp eye of the storm is the show of its strength and power. This region was last struck by such powerful storm Andrey way back in 1957. Laura will have a devastating swath of more than 100km which will cause power outages, disrupting communication & connectivity, felling/uprooting trees, and demolishing weak structures.

What's the latest from Louisiana?

The victims, killed in separate incidents by trees falling on their homes, included a 14-year-old girl in the Leesville area.

Mr Edwards said that as rescue work continued. "I'm concerned we are going to find more fatalities. I hope and pray not."

He said there was more structural damage from winds than anticipated, but the water damage was less than feared.

The tracking of the storm slightly further east meant it avoided creating a storm surge in the shipping channel, he said.

Power lines, roads and bridges were a big concern, he said, with many having to be repaired or checked.

A barge had collided with a bridge in the city of Lake Charles, quite close to where a suspected "chlorine chemical fire" at an industrial plant was being attended by emergency services.

Mr Edwards said people should stay off the roads where possible, as outer bands of the storm were still causing high water levels and winds.

Some 1,500 people, including National Guard troops, are being deployed in rescue and clean-up missions.

Vice-President Mike Pence, who joined Mr Trump at Fema, said: "While this was a major storm with devastating impact it was not as bad as it could have been."

Where did Laura hit and what's its path?

It was one of the strongest to ever hit the US Gulf Coast, striking at category four with winds of up to 150mph (240km/h).

Laura tracked north across Louisiana on Thursday, crossing into Arkansas in the afternoon, with maximum sustained winds of 50mph (85km/h) at 21:00 GMT.

The National Hurricane Center still warns of high water levels along some parts of the Gulf coast, and flooding rainfall and strong winds for northern Louisiana and south-eastern Arkansas.

More than 600,000 homes in Louisiana and 180,000 in Texas had lost power, according to the US tracking site PowerOutage.

Lake Charles, a city of 78,000, and its surrounding areas were badly hit. Trees and electricity pylons have been ripped from the ground and vehicles overturned.

Part of the roof of the Golden Nugget Casino flew off, a CNN-affiliated reporter witnessed, and an NWS radar installation was destroyed.

A producer for the WSAZ news channel tweeted before and after images of the 22-storey Capital One tower:

Ahead of the hurricane's arrival, more than 420,000 Texas residents were ordered to leave, while an additional 200,000 were told to evacuate Calcasieu Parish in south-western Louisiana.

The evacuations were complicated by the Covid-19 pandemic.

What other areas have suffered?

Haiti and the Dominican Republic were both earlier badly hit by storms Marco and Laura, with at least 24 fatalities and severe flooding. Thousands of homes were damaged and there were extensive power cuts.

Cuba suffered material damage but did not record any deaths. In Jamaica, there were reports of landslides and flooded roads.

The US territory of Puerto Rico was also hit, with President Trump declaring a state of disaster last Saturday.

In some cases a selection of your comments and questions will be published, displaying your name and location as you provide it unless you state otherwise. Your contact details will never be published.

At no time should you endanger yourself or others, take any unnecessary risks or infringe any laws.

Biden Aims To Vaccinate 70% Of US Adults By July 4 By Agencies 4 days, 9 hours ago