Election Day Dawns As US Picks Trump Or Biden

Election Day Dawns As US Picks Trump Or Biden 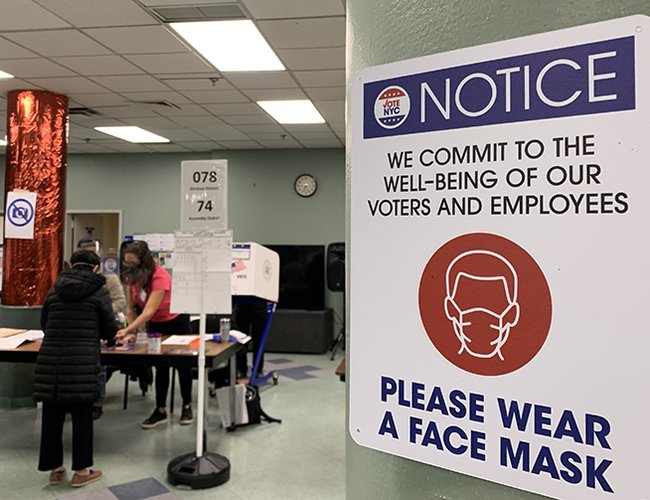 Donald Trump, 74, is seeking to avoid becoming the first incumbent president to lose a re-election fight since George HW Bush in 1992.

National polls show Democratic candidate Joe Biden, 77, with a broad lead, but the race is close in key battleground states needed to win the presidency.

Record early voting has been fuelled by the pandemic and the US is on course for its highest electoral turnout in more than a century. The election comes after

America’s worst-ever week for new coronavirus cases, with more than 1,000 people dying each day. The first polls close at 23:00GMT (18:00EST) in the eastern US, but will be open until 06:00GMT Wednesday in Alaska

Rules around processing mail-in ballots vary across the country, so in some states counting will not finish on election night.

After weeks of early voting that broke records and saw nearly 100 million Americans cast ballots by mail and in-person amid a deadly pandemic, Election Day has arrived in the United States.

Roughly 60 million voters are expected to go to the polls to choose between Democratic challenger Joe Biden and President Donald Trump – two candidates who are offering starkly different visions for a nation in crisis.

“Turnout is going to be high all around,” Michael Traugott, a professor of political science at the University of Michigan, told Al Jazeera.

Michigan is one of three Midwest states, along with Wisconsin and Pennsylvania, that Trump won in 2016 giving him a victory in the Electoral College.

Trump campaigned with large rallies in all three the day before Election Day, hoping to spark another come-from-behind win.

“People see that we fight and I’m fighting for you. I’m fighting to survive. You have to survive,” Trump told a large crowd in Traverse City, Michigan.

Joe Biden headlined a pair of rallies with entertainers John Legend in Philadelphia and Lady Gaga in Pittsburgh, the state’s two largest cities. Biden also visited Cleveland, Ohio and made a third stop in the Pittsburgh suburbs.

“I have a feeling we are coming together for a big win tomorrow,” Biden said in Pittsburgh, his voice grown hoarse but his energy still high after four campaign stops, The Associated Press news agency reported.

Both campaigns focused heavily on Pennsylvania. Republican Vice President Mike Pence, Democratic vice-presidential candidate Kamala Harris and Biden’s wife, Jill, all campaigned in Pennsylvania in the closing hours of what has been a divisive contest.

At the same time, indicative of how wide the battleground is, former President Barack Obama urged late voters to get out in Florida and Georgia yesterday while first lady Melania Trump appeared in North Carolina.

“We may be hitting 6 million votes in Georgia. We’ve never come anywhere close to that,” said Charles Bullock, a professor of political science at the University of Georgia.

Trump held a huge rally in Kenosha, Wisconsin on Monday night. It is a county he won by 238 votes in a state he commanded by a razor-thin margin in 2016. Kenosha may well be close again.

He closed out the day with a rally in Grand Rapids, Michigan, where he had wrapped up his campaign in 2016, hoping to reignite the same supporters who gave him the White House four years ago.