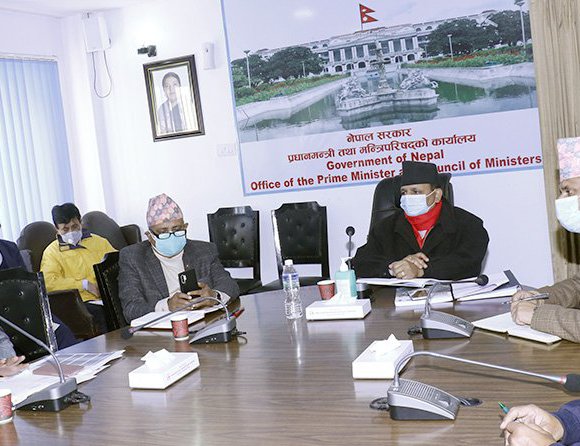 Following frequent power cut and growing public disenchantment, the Office of the Prime Minister and Council of Ministers (OPMCM) called the Nepal Electricity Authority (NEA) officials and chief of the distribution centre to address the public grievances regarding the problem of power supply with urgency reports The Rising Nepal.

The OPMCM held a discussion with the NEA chief, management team and chiefs of distribution centres inside the Kathmandu Valley at the office Monday and noted about the present scenario of power supply and interruption.

Secretary at the OPMCM Toya Narayan Gyawali directed the NEA to address the public grievances at the earliest strengthening their strategies to improve the services.

“The NEA should not take the public feedback lightly as it is our responsibility to address their genuine grievances on the fast track,” he said.

“We want to request officials and employees of NEA to handle the public demand in the field of power by acting responsibly towards the public,” he said.

The NEA claimed that there was no load-shedding and power might be cut in some places where poles and transformers have to be removed in course of expansion of roads and replacing drinking water pipes.

Secretary at the Ministry of Energy, Water Resources and Irrigation Dinesh Kumar Ghimire said that power utility should focus on system improvement to regularise power supply.

“Public demand and grievances are increasing due to use of information technology amidst COVID-19. So, we have to move ahead in a proactive manner to address their grievances,” he said.

Acting Managing Director of NEA Hitendra Dev Shakya said that the supply was disrupted due to technical problems in the system which are being solved gradually.

Stating that power tripping and shut down has comparatively reduced in the first five months of the current fiscal year compared to the same period last year, he said that grievances have increased this year compared to the previous year as consumers have become sensitive.

“People are in internet and do work from home due to COVID-19. That is why they experience more frequent tripping of power,” he said.

He, however, said that the NEA had been working seriously to provide quality, reliable and sufficient electricity by strengthening transmission and distribution lines and substations.

He said that overload in substation of core area of Kathmandu Valley including Baneshwor, Patan and Balaju is a challenge to improve power supply as people did not give permission to install transformer near their homes.

New Technology In e-cooking And Biogas Can Be Supplied To Nepal: ATEC CEO Ben Jeffreys By NEW SPOTLIGHT ONLINE 1 day, 21 hours ago

Replacing The LPG By Electricity Is The Priority Of The Government: Minister Karki By NEW SPOTLIGHT ONLINE 3 days, 11 hours ago

Nepal Imported LPG Worth Of Rs.52 Billion In The Last Ten Months By NEW SPOTLIGHT ONLINE 3 days, 23 hours ago