With the grant assistance from JICA, the rehabilitation of Sindhuli Road, which was badly damaged by earthquake, has been completed 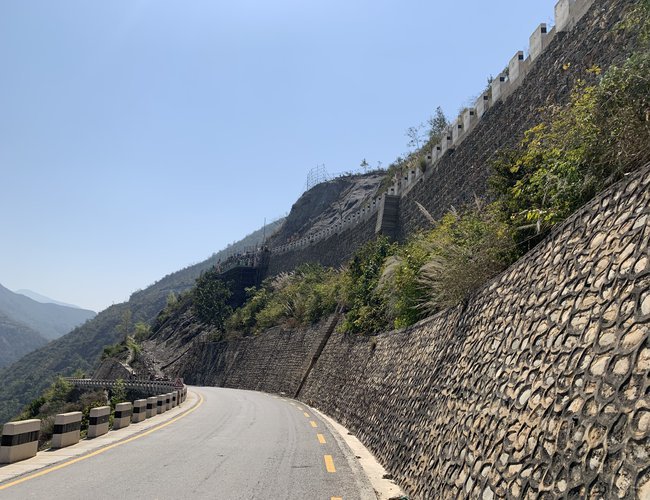 At a time when over 60 percent mobility to eastern sector of Nepal is happening through Sindhuli Road, any disruption in the road has heavy impacts. Constructed with the grant assistance from Japan government, Sindhuli Road was a life line linking capital Kathmandu with eastern hill and terai.

Although the traffic was resumed a few days after the damage caused by the earthquake in 2015, some parts of the road were hit badly. The Sindhuli Road was damaged in more than 24 places by a major earthquake on 25 April 2015 as well as a major aftershock on 12 May 2015 in Nepal. Among the damaged portions, 5 critical sites which needed rehabilitation were relevant for Japanese support due to the large scale damage as well as technological challenges.

According to a press release issued by JICA, upon request from the Government of Nepal, Government of Japan provided a grant aid to rehabilitate the critically damaged portion of the Sindhuli Road based on the Exchange of Note between GON and GOJ and Grant Agreement (G/A) between GON and JICA amounting JPY 1,047 million, which was signed on 25th October 2018.

Completion of the Rehabilitation of Sindhuli Road project supported by JICA, is leading to full operation of the portions damaged by the 2015Nepal Earthquake

A virtual inauguration ceremony was held for the completed Project for the Rehabilitation of Sindhuli Road Affected by Earthquake and it was attended by the officials of the Ministry of Physical Infrastructure and Transport (MOPIT), Department of Roads(DoR), JICA Nepal Office, the consultant Nippon Koei and the contractor Hazama Ando.

Rehabilitation of the Sindhuli road will facilitate a smooth traffic flow, which will not only result in having a reliable link between Kathmandu and the Eastern Terai but also cater to the need of the public by creating better mobility, easier accessibility to health facilities and education, better economic socio-cultural activities. Furthermore, one of the major outcomes of the rehabilitation project is the transfer of advanced and effective technology to the Nepalese Counterparts and Engineers, mainly for the slope stabilization of the mountainous roads.

Minister for Physical Infrastructure and Transport Basanta K. Nembang reiterated that Japan, a long term development partner for Nepal, has been implementing milestone projects facilitating development endeavors in Nepal and the rehabilitation of Sindhuli Road post the 2015 Earthquake is another stepping stone amongst its various other contributions.

Expressing his appreciation, he further added that the modern technological methods used for constructing the roads with the concept of ‘Build Back better’ would be a major learning experience for all its stakeholders reaping sustainable benefits.

Masamichi Saigo Ambassador of Japan to Nepal during the ceremony stated,“I am really proud of this achievement, as we were able to complete the project despite the ongoing pandemic and that this road will provide functional benefits to locals and other travelers due to improved accessibility leading to enhanced socio-economic benefits.”

During the ceremony Chief Representative of JICA Nepal Ms. Yumiko Asakuma expressed her belief that, with the completion of the project, the overall goal to secure sustainable and safe traffic along Sindhuli Road will be realized.

The Sindhuli Road is one of the most important roads in Nepal that links Kathmandu City, the capital of the country, with Eastern Terai Plain. The construction of the Sindhuli Road, with a total length of 160 km, started with the Japanese grant aid in the 1996 and was completed in March 2015.

The Sindhuli Road is a milestone project of JICA’s cooperation to Nepal as it is not only the biggest Japanese Grant Aid, but also a technical challenging road encompassing diverse geographic conditions, including mountains and river valleys.

Nepal Army Collects Over 30,000 KG Of Wastes From Major Mountains By Agencies 22 hours, 13 minutes ago