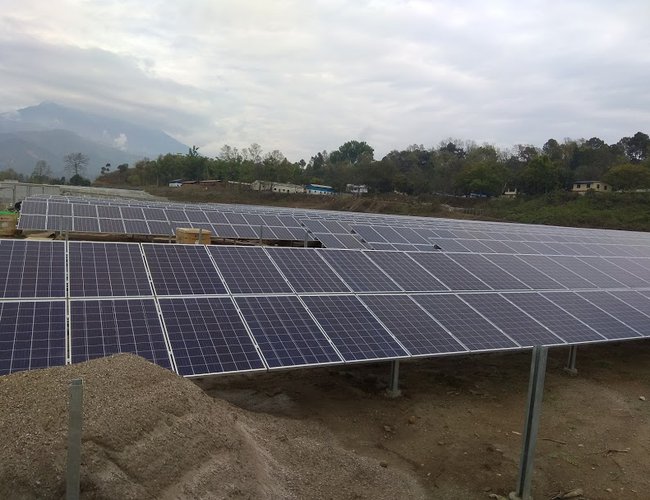 Country's largest solar plant being constructed in the Nuwakot district has generated 10 more megawatts of power. The project with capacity of 25-megawatt plant had produced 1.25 megawatt power some eight months ago report s RSS.

Chief of Project Bikash Raghubansi said that 8.75 megawatt of solar power was generated recently and was linked it to the national power grid after the successful test transmission. Of the seven blocks of the project, power is now generated from two of the solar panels and is connected to the national transmission line through the national grid of Devighat Hydropower Centre.

The project said that five more megawatts of solar power would be generated within some days.

For the power generation, construction works are moving ahead smoothly including installation of panels and clearing the site.

Likewise, Project Chief Raghubansi has committed to completing the entire project in the coming six months.

The project is being developed with the joint investment of the Government of Nepal and the Nepal Electricity Authority (NEA). Likewise, the project has received $ 30.8 million in loan assistance from the World Bank under the Grid Solar and Energy Efficiency Program.

New Technology In e-cooking And Biogas Can Be Supplied To Nepal: ATEC CEO Ben Jeffreys By NEW SPOTLIGHT ONLINE 14 hours, 30 minutes ago

Replacing The LPG By Electricity Is The Priority Of The Government: Minister Karki By NEW SPOTLIGHT ONLINE 2 days, 4 hours ago

Nepal Imported LPG Worth Of Rs.52 Billion In The Last Ten Months By NEW SPOTLIGHT ONLINE 2 days, 16 hours ago

Induction Stoves Will Be Encouraged To Replace Cooking Gas: President Bhandari By Agencies 2 days, 16 hours ago