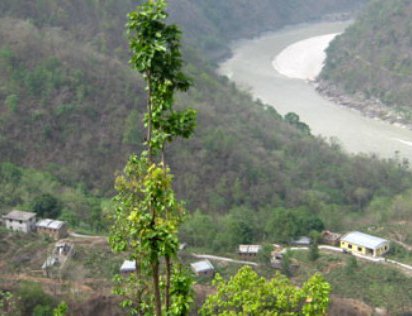 The main opposition party Nepali Congress (NC) has drawn the attention of the government through parliament to stop the unilateral construction of embankment along the Makahali River in Khalanga of Darchula district reports The Himalayan Times.

NC's leader Dilendra Prasad Badu, requesting time at the outset of meeting of House of Representatives (HoR) today, shed light on the ongoing construction of the embankment in the area that falls inside the Nepal's territory (Mahakali Municipality-5).

Badu claimed that the Indian side had encroached the border pillar and had been building the embankment despite the protest from the locals.He said, "The local people and the sister organizations of various political parties have been protesting the construction of the embankment.

The under-construction embankment poses threat to inundate fertile land of Nepal, said Badu, questioning why nobody was raising a question in the council of ministers and why the government was silent on the issue that concerns Nepal's territory and sovereignty.

Balen Shah Leading The Race with Over 4500 Votes By NEW SPOTLIGHT ONLINE 6 days, 17 hours ago