Forbes Listed Five Nepalis In Forbes’ 30 Under 30 From Asia

Forbes Listed Five Nepalis In Forbes’ 30 Under 30 From Asia 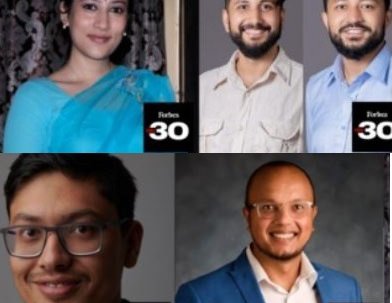 Forbes, a global media company, focusing on business, investing, technology, entrepreneurship, leadership and lifestyle, has listed five Nepalis on the list of ‘30 Under 30 Asia’ category for this year.

According to Forbes, this year’s 30 Under 30 Asia honourees have been listed on the basis of innovative ways followed by the entrepreneurs to redefine the future of business and society in Asia with their forward-thinking vision.

Pandey and Kafle are the co-founders of Offering Happiness, a company aspiring to connect Nepalis, especially those working overseas, through gift deliveries. The duo have been listed under Retail and Ecommerce category.

Claiming to be Nepal’s largest gifting platform pioneering in surprise planning alongside experiential and corporate gifting, the cofounders won the Global Student Entrepreneur Awards Nepal 2018, named best startup at Seedstars Kathmandu 2019 and were selected to compete in Seedstars’ global summit in 2020. The company was also featured in the 2021 National Geographic documentary ‘Own the Room.’

Similarly, Dahal has been listed under the category ‘Healthcare and Science’.

Dahal holds a Ph.D. in astrophysics from Johns Hopkins and a Bachelor’s in physics and mathematics from NYU Abu Dhabi. According to Forbes, Dahal is an experimental astrophysicist and postdoctoral fellow at NASA Goddard Space Flight Centre and builds telescopes to study the origin and evolution of the universe.

Dahal has deployed three microwave telescopes in Chile’s Atacama Desert to pick up microwave remnants from the earliest moments of the universe. The data is used to test the theory of cosmic inflation and consider new physics models.

Meanwhile, Singh, founding board president of Putali Nepal, a non-profit focused on menstrual hygiene education and training, has been listed under the ‘Social Impact’ category.

Forbes stated that since founding the organisation, Singh has inspired more than 1,000 people to use menstrual cups and has directly or indirectly trained more than 14,000 people. She has also empowered and facilitated youths to be trainers in their communities.

Likewise, Pathak, co-founder of InGrails, has been listed under ‘Consumer Technology’ category. InGrails is the company behind the Veda app, an application initially created to connect educational institutions with students and parents.

The application solution claims to provide the digital backbone for more than 800 schools with 1.6 million regular users across Nepal.

Advertisement Code Of Conduct Announced By Agencies 1 day, 5 hours ago