Although the four-day visit of Commander General Charles A. Flynn of the United States Army Pacific Command (USARPAC) was conducted in a transparent and open manner, fake information circulated through social media, and traditional Nepali media, overshadowed the good part of his visit 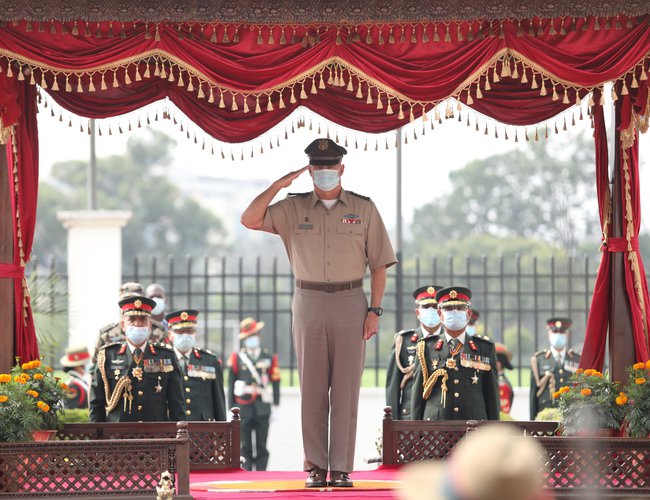 In the words of American scholar late Leo Rose, in his book Nepal: Profile of a Himalayan Kingdom, international factors have a strong and often decisive impact on Kathmandu’s domestic politics.

Debates started in the domestic sector demonstrate the painful fact of Nepal described almost 42 years ago by American scholar Rose.

As the members of parliament and social media started to express views, Minister for Foreign Affairs Dr. Narayan Khadka intervened with an official statement. He said that the arrangements are being made to prepare for Prime Minister Sher Bahadur Deuba’s visit to the United States of America.

Responding to lawmakers’ query about Prime Minister Deuba's visit planned for the USA, he said the final decision in regard to it is still awaited.

Minister Dr. Khadka clarified that such visits would be made in a transparent and accountable manner. Khadka also informed that the Chief of Army Staff would go to the US after visiting Syria and said that the visits of high-ranking officials to and from friendly countries would continue. He clarified that Nepal did not lean to the north or the south and was firm in its balanced policy for the benefit of Nepal. “The head of the government’s foreign visit is customary,” he added.

The efforts to drag Nepal and U.S. relations into controversy started from different quarters, particularly communists, after the completion of the four-day successful visit of U.S. Army General Flynn and his delegation to Nepal. The debates centered on State Partnership Program (SPP) between Nepal and the U.S.

Although Minister for Foreign Affairs Dr. Khadka declared that the matter of the State Partnership Program (SPP) with the U.S. is over, communist leaders are yet to give up their demands.

“The matter is already a closed chapter with the Nepali Army (NA) clarifying it. Thus, it is not necessary to bring the topic into a discourse again,” said Dr. Khadka responding to the queries in the House of Representatives.

According to Minister Dr. Khadka, it is not possible for Nepal to be part of any military alliance as it is highly aware of its geographical position and the sensitiveness of its neighboring country.

Disinformation like Nepal entering a secret military agreement with the U.S. against China and India and Nepal attempting to be a military base were widely circulated recently.

However, Nepalese officials including ministers and the Embassy of the United States termed all that information as fake, fabricated and false, as the campaign to damage the bilateral relations was doing the rounds for a few days.

In the last seventy-two years of the democratic history of Nepal, communist forces have been thriving, pushing Nepal into prolonged instability. This time it was no exception. Although all communists are divided over their internal matters, and some don’t see each other’s faces, all of them held united voices against SPP.

Having thrived on anti-Indian and anti-American slogans, Nepal’s radical communists are the highest beneficiaries of liberal democracy.

Although former deputy prime minister and ruling party member Madhav Kumar Nepal has toned down his comments after clarifications from the foreign minister, UML leader and former foreign minister Gyawali, former defense minister Ishwor Pokharel and leader Bhim Rawal demanded that the government should clarify the letter said to have been written by it in regard with SPP and implement a balanced foreign policy.

Talking about America’s State Partnership Program (SPP), foreign minister Dr. Khadka said that it was a mechanism developed by the United States to extend humanitarian aid during natural disasters and foster cultural exchanges. The communists-led campaigners did not listen to it.

Even after the statements of the minister, Nepal’s parliamentarians from UML and Nepal’s radical communist party including the Maoist center and Unified Socialist pressed for further clarification.

At a meeting of the International Affairs Committee, dominated by communists, Nepali Congress members, however, defended the government.

Former Deputy Prime Minister and committee member Prakashman Singh stressed that there was no need to doubt the government’s clarifications on the SPP.

Likewise, former Deputy Prime Minister and committee member Sujata Koirala said the government has already clarified the matter and it is no more necessary to discuss the matter ahead.

“The State Partnership Program (SPP) is an exchange program between an American state’s National Guard and a partner foreign country. The U.S. National Guard domestically supports U.S. first responders in dealing with natural disasters, such as earthquakes, floods, and wildfires. “ 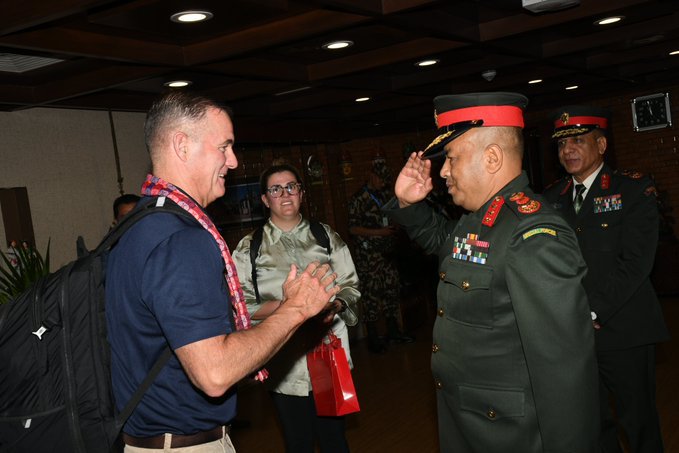 According to Embassy, SPP has existed for over 25 years and includes over 80 partnerships with over 90 countries, the majority of which are not in this region. In the event of natural and other disasters, ranging from hurricanes to earthquakes, floods, and fires, the United States seeks to share the best practices and capabilities of our National Guards — our first-line responders. SPP can be an effective means of facilitating this type of cooperation.

After an effort to drag Army into controversy, the Nepali Army’s Public Relations and Information Directorate has clarified that the Nepal Army has not entered into any agreement or understanding regarding the SPP with the US Army or the government and there is no such process to reach any agreement to that end.

"The Nepali Army has always been clear and aware of the fact that the non-aligned foreign policy pursued by Nepal, the specific geopolitical position of Nepal and its strategic sensitivities should not be adversely affected by any military partnership with anyone," reads the statement.

“The document published by some online outlets purporting to be a military deal between the United States and Nepal is fake. By policy, the United States does not ask countries to join the State Partnership Program and only responds to requests for consideration,” writes U.S. Embassy on its Facebook Page.

Minister of Law, Justice and Parliamentary Affairs Govinda Bandi bluntly said that all information published in the social media regarding the SPP and Nepal is fake.

As in the past, visiting Commander General Flynn, commander of the United States Army Pacific Command (USARPAC) of the United States of America, and his delegation visited Birendra Peace Operation Training Center Panchkhal and Army Command and Staff College (ACSC), Shivapuri.

According to a press release issued by Nepal Army, Commander General Flynn and his team were briefed by the commander and head of the peace center and the activities currently undergoing and the current state of the center. 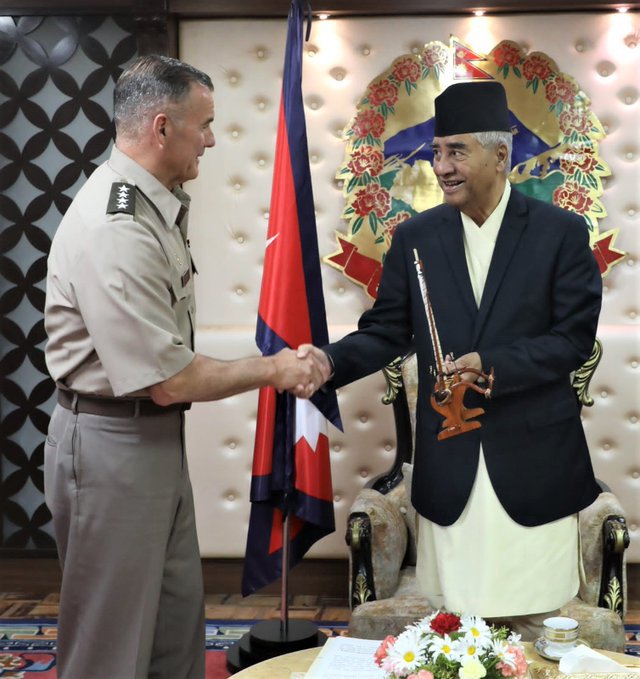 After the inspection visit, the team visited Army Command and Staff College (ACSC), Shivapuri. Addressing an interaction in the college, Commander General Charles A. Flynn said that Nepali Army is dependable land power and one of the oldest armies in the world.

Attended by Nepal Army’s Generals and officers, General Flynn also inspected the college. He also planted a tree on the premises of the college.

In honor of General Flynn, Nepal Army offered a guard of honor to him. During his visit, Nepal Army presented different operation activities of Nepal Army. During his meeting with CoAS Sharma, they discussed the matter of mutual interest and bilateral issues.

As U.S Army has been providing technical and human resources as support to Nepal Army, in managing humanitarian affairs and disasters and strengthening the capacity of Nepal’s UN Peacekeeping forces, it is a normal practice to do so.

As the issues flared up, the debates diverted from humanitarian support and disaster cooperation between the two armies to a military alliance.

Nepal Army in its official press release said, “this kind of high-level visit has further strengthened the existing bilateral relations between the two countries and enhanced mutual respect between the two armies.” Similarly, U.S. Embassy in Nepal in its tweet says “General Flynn’s visit was a success.”

Home Minister Bal Krishna Khand said Nepal and the USA continued to see bilateral goodwill visits and exchanges of regular assistance since the beginning and a recent visit from the USA was the continuity of the same culture.

Although the recent controversy is slowly receding after the intervention by the government, this kind of storm will not die any time soon. Celebrating 75 years of establishment of diplomatic relations with Nepal and contributing immensely to the overall development of Nepal, the United States has been a key partner of Nepal.

As the global balance of power is shifting, Nepal’s big challenge now is to balance its relations with the U.S and two fiercely competitive neighbors India and China who dislike any kind of strategic presence of the sole superpower in Nepal. 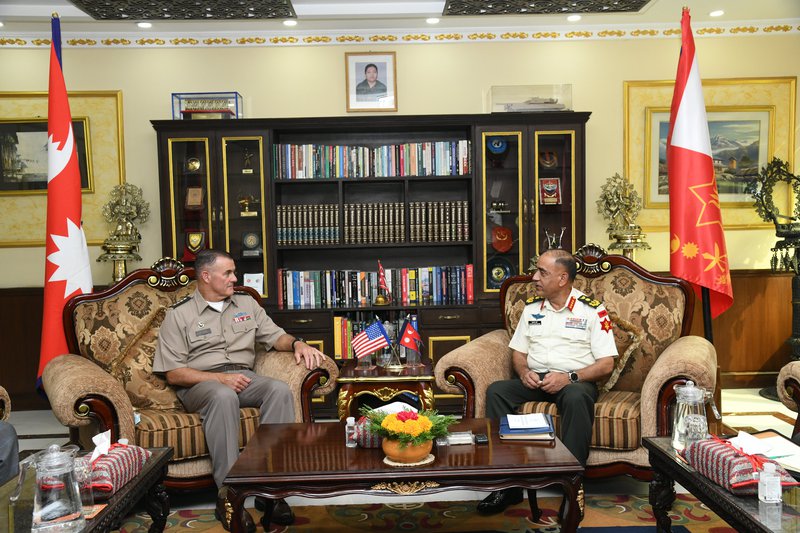 “Given its track record, however, it is reasonable to assure that Kathmandu will continue to function as an independent and fiercely nationalist polity- that advance its perceptions of Nepal’s interest,” said late Rose.

In recent years, Prime Minister Deuba, with the Ministry of Foreign Affairs under good hands, and his own team led by his spouse Dr. Arju Deuba Rana, has made a great stride in foreign affairs restoring friendly relations with its neighbors, particularly with India. PM Deuba may do a similar feat with the U.S. by skillfully balancing the relations.