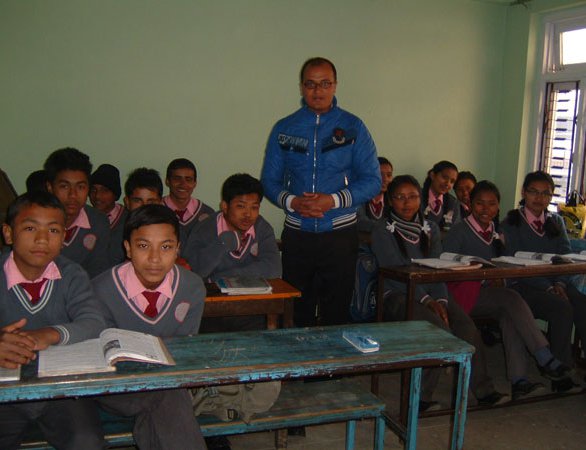 Nepal is neatly tucked between India and China, along the Himalayas. This location is ideal in some respects, however, fatal in others. This position causes Nepal to fall on the high seismic belt. The frequency of earthquakes, in places  with ancient homes and structures, makes Nepal a rather dangerous region.

According to National Seismological  Center, it records many earthquakes in a year.  In the last three months alone, Nepal has faced four earthquakes of over 4 Richter scale.

That is, earthquakes take place in Nepal often. However, some earthquakes are more damaging than others. Nepal has a brutal, long history with devastating earthquakes. The last big earthquake took place in 1934, when 20,000 people were killed. An earthquake with the magnitude of 8 or higher on the Richter scale is supposed to take place every 80 to 100 years.

In 2001, Forbes had named Kathmandu the city most vulnerable to earthquakes. The plate tectonics near the Himalayas and the Tibetan plateau make it a hazardous area. According to GeoHazards International, in the 20th century alone 11,000 people have died in Nepal because of earthquakes.

With the population growing more than 6.5% annually and most of the population living in poverty, a large earthquake in Kathmandu would not be taken lightly.

The mass casualty would not be a businessman or poverty struck families. If an earthquake were to come, the biggest risk would be the school children. Out of the 7.8 million children who go to school, 3.3 million attend private schools while the other 4.5 million attend government run public schools. Most public and private schools are overflowing with an excess amount of children. In an average public school class, there are around 50 students per teacher. This not only makes it harder for students to learn, but it also makes it impossible for students to get out of these longstanding buildings after an earthquake.

Schools are rented out in old houses, which neglect the idea of quake safety. The use of pillars and other sturdy equipment have not been used in these buildings. When and if an earthquake arrives, these may be the first to fall down. Schools may have an earthquake safety plan, but they are not put into good use. These planned actions are neither practiced nor pursued resulting in a dangerous, panicked escape after an earthquake.

Not only does the student body not know what to do, but also the teachers aren’t aware either. The plan is never put into action, and when an earthquake takes place, it is difficult to manage the panicked pupils. They also lack the essentials kit for an earthquake emergency. Some private, usually embassy schools, prioritize the earthquake escape plan and practice. The required attention given to these students concerning quakes makes the environment safe.

However, other private schools have a plan but an unpracticed one. The teachers may know what to do, but the students do not.  As Priyadarshani Shrestha, an ex student from Shuvatara School (Lamatar), said, “We didn’t really have an escape plan. We had a drill which we practiced once in the two years I was there, we’d go on to an isolated basketball court on top of the slope in which the school stood.”

The National Society for Earthquake Technology-Nepal (NSET) focuses on issues regarding natural disasters, especially earthquakes. NSET encourages the public to stay safe by utilizing the ‘Duck, Cover, and Hold’ technique. By ducking under a reliable piece of furniture, one can ensure one’s safety during the time period of the earthquake. By covering one’s head, one can protect themselves from any severe damages. After an earthquake is finished, one should stay in the safety position in case of any aftershock.  If these 3 simple rules are followed in the household or the school ground, many lives could be saved.

There are certain schools that have taken the ‘Duck, Cover, and Hold’ technique under their wing. One such school is Rupy’s International School. Ex-student, Chime Dolkar Nepali, said that they practiced the earthquake drill once a month. This effort will benefit the staff and students when an earthquake arrives. Rupy’s International School’s buildings are houses, and may not be earthquake friendly. However, with this drill perfected, it would not be likely for an earthquake to harm the students.

Taking basic steps, like adapting the ‘Duck, Cover, and Hold’ technique within a school will result in a safer study atmosphere within schools. Other than having a basic plan and practicing it, there are many things a school can do in order to ensure safety during a quake.

Chime Dolkar understands this, and has some ideas, “They should offer disaster management classes and every class should be given an earthquake kit containing all the required materials, besides conducting regular earthquake drills.”

If these classes were an option, the student would not only know how to handle a disaster but also know why a disaster took place in the first place. New ideas and innovative minds of these educated youngsters could lead to a fresher, more effective way to stay safe during a quake.

Making schools earthquake-proof and helping the students stay safe during a disaster should be an administrator’s priority. By discussing earthquakes and practicing drills, they could minimize the number of casualties. Many things can be done, and should be done in order to guarantee protection and security to those students who have come to learn.

The government should also pull up their socks, and standardize the earthquake safety plan. They could create decrees that safeguard students against disasters, such as these large tremors. Officials could do this by following the rules and regulations that NSET has already provided. The safety of the public during an earthquake should be of a very high importance. Like the saying goes, it is better to be safe than sorry.