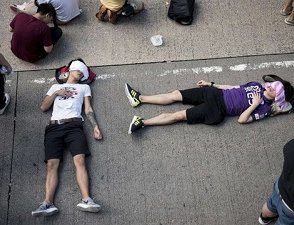 The bustling Central and Mong Kok areas in Hong Kong remain paralyzed for the past few weeks. Boasting of skyscrapers housing some of world’s top businesses and companies, these financial hearts of Hong Kong have lately seen swathes of protesters. Young casually-dressed students have stolen the limelight from the suave executives and managers. Barricades can be spotted instead of luxury cars. And instead of briefcase in their hands, people have umbrellas.

The pro-democracy demonstrations or infamously being referred to as the ‘Umbrella Revolution’ in Hong Kong have seen tens of thousands taking to the streets to push for free elections and seek the resignation of the state’s Chief Executive CY Leung. Protests broke out last month after Beijing, going back on its promise of allowing free elections, said that it would screen all candidates for the elections in 2017 But as the demonstrations stretch into its third week with no signs of agreement between the government and the protesters, it has slowly started to fizzle. The number of people on the streets has been dwindling; their calls going completely unheeded. Although the protests might have shaken the Chinese leadership to some extent, it is less likely to usher in any major change.

Beijing has turned a deaf ear to the demands of the demonstrators. The state media has slammed protests and gone as far as blaming the West for igniting it. The central government has remained mum, a clear indication that it is not ready to budge from its position. With strong backing from the Chinese leaders, Chief Executive Leung has showed no signs of stepping down. He has instead asked for protests to end. The strategy is clear: Bring the situation under control by tiring the protesters out. This has been reflected in the restraint and patience adopted by the security forces. After a heavy crackdown in the first week, the security forces have handled the situation with uttermost sensitivity avoiding any form of violence defying speculations that the situation go out of control bring back the bitter memories of the Tiananmen Square a quarter of century ago. What started out as a movement of the thousands has now dropped down to hundreds. Many people on the streets have gone back to  normal life, tired of revolting against an apathetic government.

To the relief of Beijing,  many natives themselves are critical of the protests. They have even clashed with the protesters to press the demand that the 'chaos' be ended without further delay.  The protests may have gained wide international coverage, but 1.5 million Hong Kongers have signed a petition demanding the return to normality and rejecting any form of support to the protesters' Occupy Central campaign. They believe that the protesters are trying to hold Hong Kong hostage in the fight for democracy and believe that China’s ‘two countries one system’ policy works best. Apparently, they have a point: Hong Kong colony relies heavily on mainland China for its economy, angering it could bring grave implications. The island city is mainland China’s second largest trade partner after the US.  Beijing has been Hong Kong’s biggest trading partner since 1985. The former British colony also suffers from many economic challenges making its dependence on China all the more important. Poverty has been one of its biggest challenges. Beyond the tall skyscrapers and the bright lights, a staggering 1.3 million people live under the poverty line in the state of 7 million. Inequality has been rising and home prices have shot up astoundingly.

The movement could have met some success had it gathered moral support within the mainland China. Thanks to the deep running animosity between the local residents, all it received was a Chinese backlash. China’s social network Weibo has been filled with harsh comments against its special administrative region. Defying expectations that the protests could actually trigger something similar in China’s  contentious regions such as Tibet and Xinxiang, the demonstration has been unable to spur anything as such partly due to China’s censorship and partly because of its failure to capture the imagination of the Chinese. They believe that Hong Kongers already have enough freedom and asking for more is simply being unreasonable. Some have gone on to call Hong Kong as ‘English running dogs’ in reference to the support they have allegedly received from the West. Articles criticizing the protest have been widely circulated and a feeling of hostility is clearly visible.

While the courage of Hong Kongers to stand up against the authoritarian Chinese leadership is definitely commendable, they should understand that their movement is growing increasingly futile.

Brazil Launches Phase II Of The Operation Green Brazil In The Amazon By NEW SPOTLIGHT ONLINE 1 day, 13 hours ago

Situation In China-India Border Area Is Stable And Under Control: Chinese Foreign Ministry By NEW SPOTLIGHT ONLINE 1 week, 1 day ago

Japan To Lift State Of Emergency For All Areas By NEW SPOTLIGHT ONLINE 1 week, 4 days ago