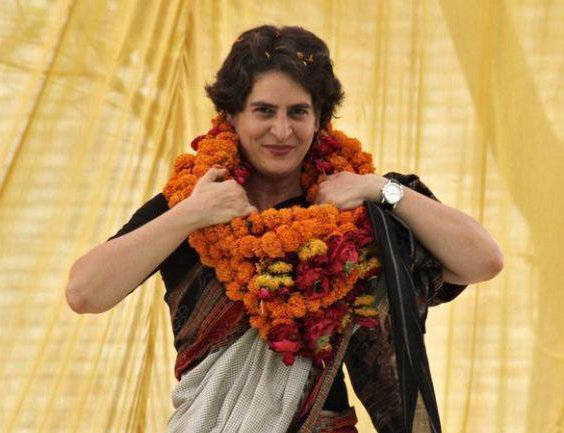 Priyanka Gandhi Vadra was y appointed a general secretary of the Congress party just around two months before the 2019 Lok Sabha elections. Priyanka Gandhi, who is the younger sister of Congress president Rahul Gandhi, has been given charge of Uttar Pradesh East.

With today's developments, Priyanka Gandhi has become the 11th member of the Nehru-Gandhi family to join politics.

The Gandhi family's involvement with politics can be traced to Motilal Nehru, the father of India's first prime minister Jawaharlal Nehru.

Motilal Nehru was a member of the pre-independence Congress party and was involved in the fight against the British. Motilal Nehru was twice the president of the party, first between 1919 and 1920 and then from 1928 to 1929.

Motilal Nehru's son, Jawaharlal, joined politics in 1912 after he completed his education at the Cambridge University. In 1923, Jawaharlal Nehru became the general secretary of the Congress party.

Jawaharlal Nehru rose through the ranks of the Congress party and became one of the leading freedom fighters. In 1947, when India attained Independence, Nehru became the first prime minister of the country.

While Jawaharlal Nehru was the prime minster, his daughter Indira joined politics. In 1958, she was appointed as a member of the Central Parliamentary Board of Congress.

After Jawaharlal Nehru's death in 1964, Indira Gandhi remained part of politics. She ultimately became the prime minster of India in 1966. She remained prime minister for the next decade. During this ten-year term, she infamously declared Emergency during which many civil rights were curbed.

In 1977, she was voted out of power in elections she held to mark the end of the Emergency. However, she returned to power in 1980 and remained prime minister until 1984, when she was assassinated.

India Gandhi had two children from her marriage to Feroz Gandhi, who himself was active in politics and was part of the Quit India movement -- Sanjay and Rajiv.

Indira's elder son Sanjay was actively involved in politics during his mother's rule as prime minister. In fact, it was said that Sanjay Gandhi wielded influence within the Indira Gandhi cabinet. He was believed to be Indira Gandhi's chosen successor to lead the Congress party. However, Sanjay Gandhi died in 1980 in a helicopter accident.

In 1984 when Indira Gandhi was assassinated, the younger son, Rajiv, became the prime minister. He became the PM just months after joining politics.

In 1989, the Congress lost power and two years later, in 1991, Rajiv Gandhi was assassinated in a bomb blast.

With Rajiv Gandhi's death it seemed as though the Congress party's involvement in politics had ended -- Rajiv's wife Sonia was completely averse to joining politics. In fact, during a speech in the Nehru-Gandhi stronghold of Raebareli, Sonia famously said that she would rather have children become beggars than enter politics.

In December, her son Rahul took over as Congress chief. Rahul had been active in politics since 2004, when he first became a Member of Parliament from Amethi, which was his father's Lok Sabha constituency.

And now, after much will-she, won't-she speculation Priyanka Gandhi has formally joined politics.

And in case you forgot, Priyanka and Rahul's cousin Varun Gandhi, who is the son of the late Sanjay Gandhi, and his mother Maneka Gandhi are also active in politics. They, however, are in BJP.

US President Trump To Arrive Today In India For Two Days Visit By NEW SPOTLIGHT ONLINE 19 hours, 34 minutes ago