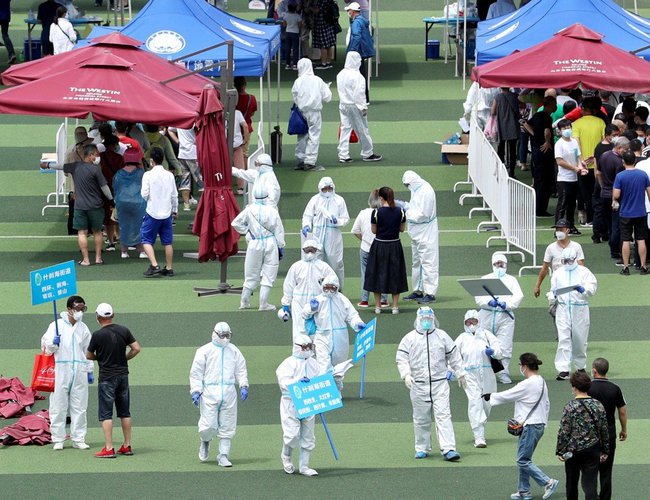 By Olga Wong and Elizabeth Cheung

Compulsory coronavirus testing has been extended to Beijing passengers flying into Hong Kong who are exempt from quarantine, under a new government measure to protect the city from the latest Covid-19 outbreak in the capital.

The fresh requirement, which took effect immediately on Wednesday, came as Hong Kong recorded eight imported cases but no new local infections. With the addition of the new cases, involving six people who had been to Pakistan and two who arrived from the Philippines, the city’s tally of confirmed infections reached 1,120.

Currently, all air arrivals from mainland China who are required to quarantine for 14 days are subject to a mandatory test. But some coming to Hong Kong from the mainland are granted quarantine exemptions by the chief secretary via a regulation under the Prevention and Control of Disease Ordinance. They are subject to medical surveillance, but a virus test is optional.

It covers those deemed important for the running of government, protecting the safety or health of Hongkongers, supplying goods and services required for the normal functioning of the city, as well as “exceptional circumstances” cases which serve Hong Kong’s public interest and involve 30 categories of people such as air travel workers and cross-border students.

Confirming an exclusive Post report, the Food and Health Bureau said late on Wednesday that people who were exempted from quarantine and had been to Beijing in the past 14 days would be given a sample bottle upon arrival at Hong Kong airport. They would need to collect a saliva sample at home and bring the specimen to a designated clinic.

The Post contacted the government to determine how many air travellers from Beijing have been exempted from mandatory quarantine in Hong Kong since early February, when the self-isolating measures were introduced.

No government department could provide an overall figure for the number of people exempted from quarantine upon arrival from the mainland, as the approval of exemptions for workers was done by individual units based on the industry.

According to replies from eight government arms by press time, including the Food and Health Bureau and the Development Bureau, more than 11,000 people had been granted an exemption. But no separate figure for travellers flying between Beijing and the city was given.

The new measure came as neighbouring city Macau announced that all arrivals who had been to Beijing in the previous two weeks would be required to receive 14 days of medical surveillance in specific locations. The measure came into effect on Wednesday noon.

Beijing is in a partial lockdown following the latest outbreak of Covid-19, with at least 137 infections linked to a wholesale food market there. The capital raised its emergency response to the second highest level on Tuesday night.

People from “key areas” – which are defined as estates, markets or neighbourhoods with confirmed Covid-19 patients – are banned from leaving Beijing.

In another development, Hong Kong’s Leisure and Cultural Services Department announced that more venues would be reopened from Saturday in light of the latest Covid-19 situation. These facilities, which are free to the public, include outdoor soccer pitches, cricket grounds, basketball courts and volleyball courts. A few public swimming pools will also be reopened.

Separately, Taiwan’s Central Epidemic Command Centre announced on Wednesday that short-term business travellers from a specific list of countries and regions, including Hong Kong, could apply to shorten the 14-day mandatory quarantine period starting from next Monday.

Two Hong Kong government-arranged flights were expected to bring more residents stranded in India home this week. The flights, leaving Bangalore on Thursday and Chennai on Saturday at the earliest, were set to bring back about 280 people. Returnees would pay for the cost of the air tickets.

Meanwhile, University of Hong Kong researchers found that six out of nine infected passengers in a study of 215 Hongkongers on the coronavirus-stricken Diamond Princess cruise ship did not show symptoms during the 14-day quarantine period upon their return to the city.

The ship was quarantined in the port of Yokohama in Japan in February, as more than 700 passengers and crew members were infected with the coronavirus.

The researchers, including infectious diseases expert Professor Yuen Kwok-yung, said the findings suggested that asymptomatic people could be transmitting the virus to others.

“Such transmission could explain in part the rapid increase in numbers of new cases in high-incidence countries such as the USA, Russia, the UK, Brazil, and European nations,” they said in a study published in The Lancet Infectious Diseases journal last week.

China Ends 4 Days Of Military Drills Around Taiwan By Agencies 3 hours, 24 minutes ago

Russia Continues Assault In Ukraine By Agencies 1 day, 2 hours ago

China May Increase Military Pressure On Taiwan By Agencies 1 day, 2 hours ago