Keeping this context in mind, Outline Media organized an event last month to discuss the poor state of affairs pertaining to WPS in Nepal. 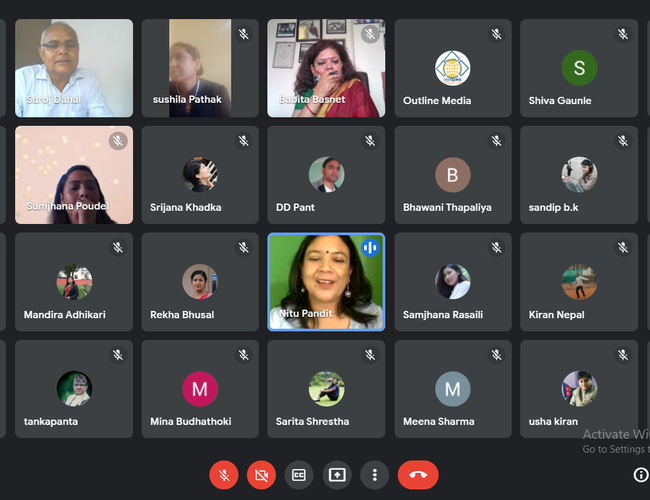 Women, Peace and Security (WPS) is a policy framework that recognizes that women must be critical actors in all efforts to achieve sustainable international peace and security. The Government of Nepal (GON) adopted the National Action Plan (NAP) on UNSCRs 1325 and 1820 in 2011 to improve the participation of women in decision making and in the peace process, protect and promote the rights of women and girls, and mobilize resources to ensure that these UNSCRs translates into concrete changes in Nepal. Although this has brought about some changes, the status of women in the country especially in regards to decision making is far from satisfactory. Women’s participation in peace negotiations held in 2005 and in the ongoing talks since was negligible. With the introduction of federalism in the country, things were expected to change for the better. Women’s involvement in decision making took a step forward with provision of 33 percent of mandatory representation of women in all structures as a remarkable outcome. However, the pace of change has not been satisfactory.

Keeping this context in mind, Outline Media organized an event last month to discuss the poor state of affairs pertaining to WPS in Nepal. The event, organized as a part of Outline Media’s assignment entitled ‘Engaging Media for Advancing WPS Agenda’ for UNDP focused on why the issue of WPS in Nepal has not been addressed as much as it should. Speaking in the event, the then Minister of Law, Justice and Parliamentary Affairs, Lilanath Shrestha accepted that successive governments including theirs had not been able to ensure women’s rights and stressed on the need to do more. Parbati Rawal, Chair of National Concern and Coordination Committee, National Assembly stressed on the need for policy and implementation to go hand in hand and pointed out that only making policies might not be enough. nother participant, Shanta Chaudhary, a member of the House of Representatives stated that education, property right and personal freedom were key to women empowerment and until and unless these were ensured, it would difficult to ensure WPS. The event, which also saw leaders from provinces discussed issues that affected WPS in myriad of ways. Shova Lama of Province 2 stated that lack of accountability was one of the major reasons for violation of women’s right whereas Manju Yadav of Province 1 stated that political interference and traditional justice mechanism had also been a hindrance to WPS. Pre Bahadur Pulami of Bagmati Province stated that women’s participation in public domain should be increased and their participation needs to be more meaningful to ensure better WPS.

In view of the opinions put by honorable participants and members, Nepal does have a long way to go. The NAP II aims to ensure proportional and meaningful participation of women at all levels of conflict transformation and peacebuilding processes; protection of women and girls’ rights and to guarantee the direct and meaningful participation of conflict-affected women in the formulation and implementation of relief, recovery and rehabilitation programs; and address the specific needs of women and girls. However, it needs to move much beyond that. Firstly, Nepal has entered a new administrative structure with a promising future. The NAP II needs to ensure that in this new administrative structure, the issue of WPS is considered in all the fields. It can also be noticed that the NAP II is fraught with some gaps which need to be considered by policy makers. Despite being a comprehensive document, the second phase of NAP, having been formulated in the context of federalism, does not touch upon the issue of WPS in the changed administrative context. With provincial and local governments in place, the NAP II should talk about how it plans to utilize this new federal structure to advance the issues of women.