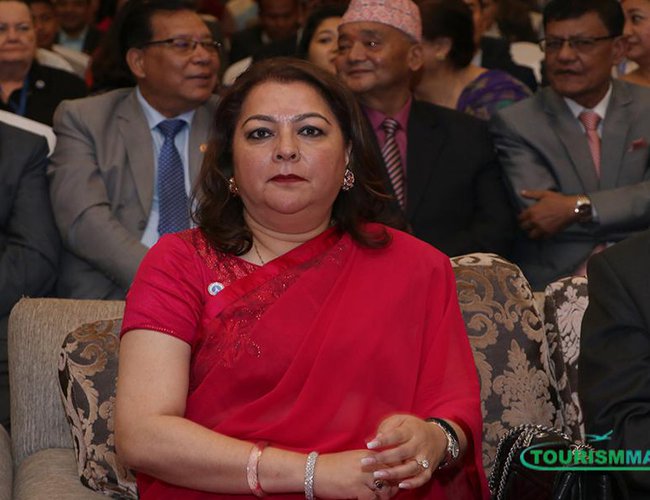 President of NICCI, Shreejana Rana expressed concerns over the gradual drop in the Foreign Direct Investment (FDI) from India. “Since beginning of the history of FDI in Nepal, India used to top the list of FDI countries, however, in the last five or six years, we are witnessing a gradual fall in investment from India,” she said.

According to her, although five yearly statistics show gradual increase in FDI commitments, FDI remains fairly dismal, both in terms of commitments and actual implementation. The FDI flow is far below the need of the country for overall growth of our economy, she stated.

Rana appreciated the amendment made to the Rail Service Agreement which is expected to bring about a huge change in Nepal’s international trade.

As per the amendment, rails and wagons under the ownership of Nepal Railway Company can operate up to Kolkata-Haldia from Birgunj and Biratnagar.

The AGM has reelected Rana to the post of NICCI.

Minister for Foreign Affairs Dr. Narayan Khadka said that the construction of new railways and hydropower projects would facilitate the business community and investors in Nepal and India in the short and long run.

“Cross-border connectivity brings economies closer, promotes bilateral trade and facilitates people to people contacts which have multiplier effects in the economy,” he said while speaking at the 26th and 27th Annual General Meeting of Nepal India Chamber of Commerce and Industry (NICCI) in the Capital on Thursday.

He maintained that a long-term approach in joint development of hydropower and seamless power trade will unleash further economic potentials between the two countries.

Suresh Prabhu, former Minister for Power, Infrastructure, Commerce and Industry of India, said that railway connectivity could be expanded up to Kathmandu from India. It will facilitate the movement of people and goods as well, he maintained.

He also said that Nepal can be a good destination of medical tourism so it needs to develop robust health infrastructure and required facilities, it will also help in the growth of local economy.

According to him, India is a twin brother of Nepal, it’s not the ‘big brother’.

Former Ambassador of India to Nepal, Ranjit Rae, said that Pancheshwor Multipurpose Project can change the dynamics of relations between the two countries and help in development. He emphasised the early implementation of the project.

Kulman Ghishing, Managing Director of the Nepal Electricity Authority, said that total wheeling capacity of Nepal-India cross-border transmission line is 1500 Megawatt. The power exchange was started in 1971 and with the cooperation with the companies like SJVN which is developing Arun III hydroelectricity, and construction of more powerful transmission lines, it will grow in the days to come.

President of Federation of Nepalese Chambers of Commerce and Industry, Shekhar Golchha, said that his organisation was going to organise a business summit especially targeting the business and investors from India. It will be realised soon, in collaboration of Confederation of Indian Industries, he informed.

President of Nepal Chamber of Commerce, Rajendra Malla, said there was a need for developing Ayurveda sector in Nepal and enhance the export of herbs and herbal medicines to India. An international-level quarantine lab is needed at Nepal-India border.

Likewise, President of Confederation of Nepalese Industries, Vishnu Agrawal, FDI is still an untapped area of cooperation in Nepal-India relations. However, the FDI flow is not encouraging in recent years despite multiple success stories.

Another industry that the two countries are cooperating is information technology as India has become the global hub of ICT business. Cost of manpower in Nepal is 60 per cent of India, most of the skills required in the IT industry is available in Nepal, and energy is cheaper here, said Agrawal.

Kathmandu’s Waster Can Generate 342 Kilolitres Of Energy By Agencies 4 hours, 51 minutes ago

JP Morgan Warns Of $380 Oil After Price Cap On Russian Oil By Agencies 9 hours, 49 minutes ago

Indian Oil To Supply NOC Fuel From Barauni By Agencies 1 day, 10 hours ago