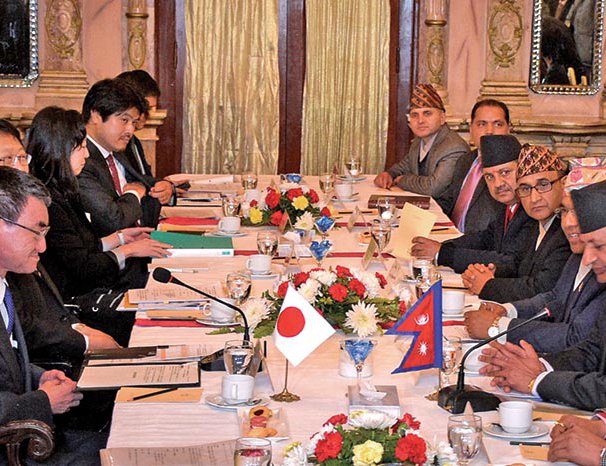 Japan will send a technical team to Nepal next week to extensively discuss the issue of importing Nepali labourers to narrow the labour deficit created by an ageing society in its country.

This commitment to send a team was made during a meeting between Foreign Affairs Minister Pradeep Gyawali and his Japanese counterpart, Taro Kono, in Kathmandu today.

“The technical team will hold comprehensive discussion on labour quota that Japan intends to allocate for Nepal, sectors that will absorb Nepali workers and whether the government or the private sector will oversee the migration process to Japan,” said Labour Secretary Mahesh Prasad Dahal.

According to The Himalayan Times, in December, the Japanese government had approved a law allowing Japanese firms to employ blue-collar workers from 10 countries, including Nepal. As per the decision, about 345,000 foreign workers will be allowed to work in Japan over the first five years. These foreign workers will be deployed across 14 industrial sectors, including nursing care, janitorial work, manufacturing, the hotel industry, agriculture and fishing, as well as food processing and food services.

Earlier, the government had proposed to Japan to adopt a government-to-government (G2G) model to recruit Nepali migrant workers for various technical and non-technical jobs in Japan.

During today’s meeting between foreign ministers of the two countries, Japan also agreed to send a team of entrepreneurs to take part in the Investment Summit scheduled for 29-30 March.

According to Gyawali, Japan has also expressed interest to invest in Nepal’s infrastructure, connectivity and energy sectors. Both the nations have agreed to hold further bilateral consultation on investment and cooperation.