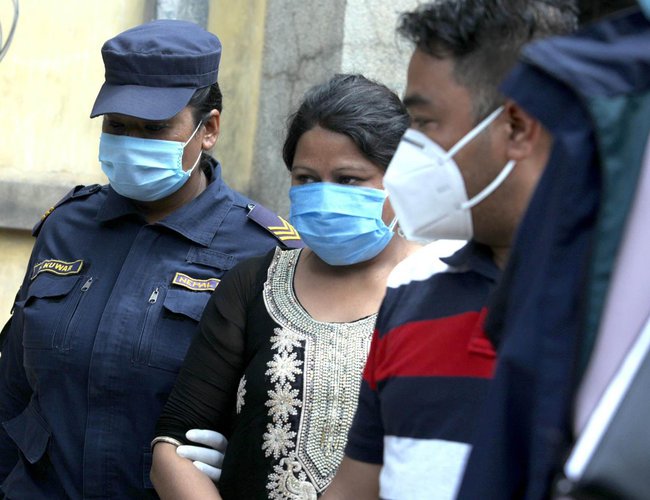 The Police public Kalpana Mudbari Poudel, 37, from Chitwan Kalika Municipality-7, as the prime culprit of the horrible murder case in Gongabu.

The accused confessed that she had fed sleeping tablets to deceased Krishna Bahadur Bohara by mixing it in curd and after Bohara fainted, she killed him by hitting him in his scrotum with the help of a hammer, revealed the Police by organising a press conference today reports The Rising Nepal.

According to Senior Superintendent of Police (SSP) Deepak Thapa, the accused in her statement confessed that she had killed Bohara after he started blackmailing her by creating a fake Facebook ID and posting her private photos.

In her preliminary statement, she said that she had planned the murder after Bohara started publishing her private pictures on Facebook. The police have confiscated sharp objects, hammer used to hit Bohara, gloves with blood stain, pieces of mattress, black colored shawl, handle of the suitcase, the cover of sleeping tablets and some mobile phones.

The police have also arrested Kalpana's 15-year-old daughter as an accessory to the crime.

Kalpana had fled to Chitwan after allegedly committing the crime. The police arrested her from Shaktikhor, Chitwan. SSP Thapa said that Bohara and the accused got to know each other around three-four months ago via Facebook.

The deceased was residing in a Gongabu-based hotel for the past eight months. He used to visit Kalpana's flat frequently.

On the day of the crime, deceased Bohara had reached Kalpana's flat in Tokha Municipality-10 via scooter with registration number Ba 72 Pa 5644.

He had eaten meat, beaten rice, curd and vodka in Kalpana's place. Kalpana had allegedly fed him five sleeping tablets by mixing it with the curd. After Bohara fainted, she hit him on his scrotum with a hammer and strangled him to death with the help of a black shawl.

Sunsari Registers 86 Incidents Of Rape In Eight Months By Agencies 6 months, 2 weeks ago